The Tractel Ascent/Descent RescueSystem is a manually operated rescue system.

The Tractel Ascent/Descent Rescue System is a manually operated rescue system.Designed for raising and lowering personnel or equipment. It can be used in rescue situations as well as in industrial work access. The system is also ideal for confined space applications.The system features double pulleys with special design. The sheaves of the pulleys has a built-in anti-reversing lock that activates when the system is used in descent mode. This locking action results in added friction that contributes to reduce the effort and increase the control during the lowering operation. 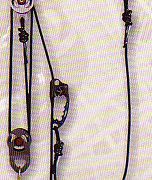